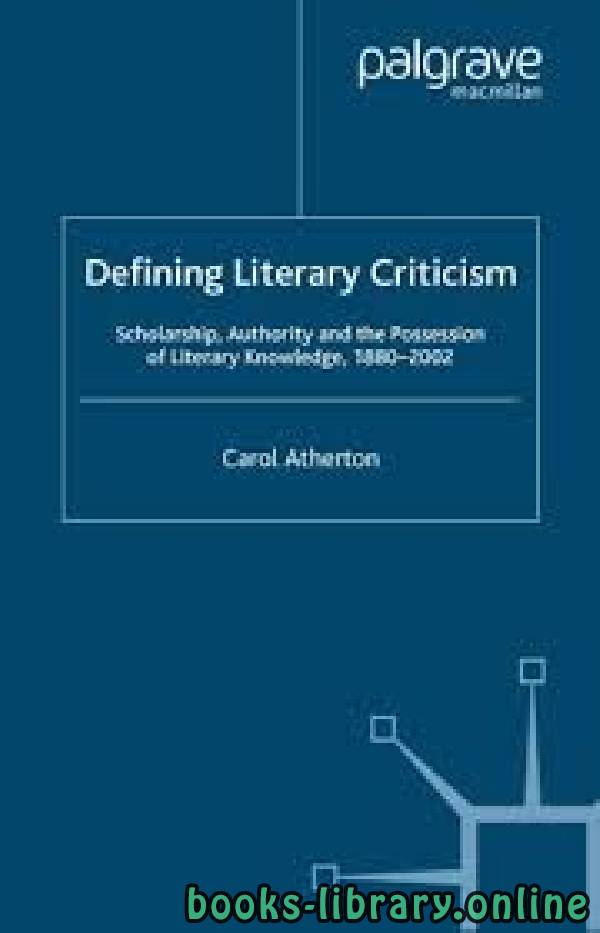 Outlining the controversies that have surrounded the academic discipline of English Literature since its institutionalization in the late nineteenth century, this important book draws on a range of archival sources. It addresses issues that are central to the identity of academic English - how the subject came into existence, and what makes it a specialist discipline of knowledge - in a manner that illuminates many of the crises that have affected the development of modern English studies. Atherton also addresses contemporary arguments about the teaching of literary criticism, including an examination of the reforms to A-Level literature.
Carol Atherton - ❰ له مجموعة من المؤلفات أبرزها ❞ Defining Literary Criticism ❝ ❱
من النقد الأدبي Literary criticism كتب تعلم اللغة الإنجليزية - مكتبة كتب تعلم اللغات.

Outlining the controversies that have surrounded the academic discipline of English Literature since its institutionalization in the late nineteenth century, this important book draws on a range of archival sources. It addresses issues that are central to the identity of academic English - how the subject came into existence, and what makes it a specialist discipline of knowledge - in a manner that illuminates many of the crises that have affected the development of modern English studies. Atherton also addresses contemporary arguments about the teaching of literary criticism, including an examination of the reforms to A-Level literature.

Classical and medieval criticism
Literary criticism is thought to have existed as long as literature. In the 4th century BC Aristotle wrote the Poetics, a typology and description of literary forms with many specific criticisms of contemporary works of art. Poetics developed for the first time the concepts of mimesis and catharsis, which are still crucial in literary studies. Plato's attacks on poetry as imitative, secondary, and false were formative as well. The Sanskrit Natya Shastra includes literary criticism on ancient Indian literature and Sanskrit drama.

Later classical and medieval criticism often focused on religious texts, and the several long religious traditions of hermeneutics and textual exegesis have had a profound influence on the study of secular texts. This was particularly the case for the literary traditions of the three Abrahamic religions: Jewish literature, Christian literature and Islamic literature.

Literary criticism was also employed in other forms of medieval Arabic literature and Arabic poetry from the 9th century, notably by Al-Jahiz in his al-Bayan wa-'l-tabyin and al-Hayawan, and by Abdullah ibn al-Mu'tazz in his Kitab al-Badi.

Enlightenment criticism
In the Enlightenment period (1700s to 1800s), literary criticism became more popular. During this time period literacy rates started to rise in the public; no longer was reading exclusive for the wealthy or scholarly. With the rise of the literate public and swiftness of printing, criticism arose too. Reading was no longer viewed solely as educational or as a sacred source of religion; it was a form of entertainment. Literary criticism was influenced by the values and stylistic writing, including clear, bold, precise writing and the more controversial criteria of the author's religious beliefs. These critical reviews were published in many magazines, newspapers, and journals. Many works of Jonathan Swift were criticized including his book Gulliver's Travels, which one critic described as "the detestable story of the Yahoos".

19th-century Romantic criticism
The British Romantic movement of the early nineteenth century introduced new aesthetic ideas to literary studies, including the idea that the object of literature need not always be beautiful, noble, or perfect, but that literature itself could elevate a common subject to the level of the sublime. German Romanticism, which followed closely after the late development of German classicism, emphasized an aesthetic of fragmentation that can appear startlingly modern to the reader of English literature, and valued Witz – that is, "wit" or "humor" of a certain sort – more highly than the serious Anglophone Romanticism. The late nineteenth century brought renown to authors known more for their literary criticism than for their own literary work, such as Matthew Arnold.

The New Criticism
However important all of these aesthetic movements were as antecedents, current ideas about literary criticism derive almost entirely from the new direction taken in the early twentieth century. Early in the century the school of criticism known as Russian Formalism, and slightly later the New Criticism in Britain and in the United States, came to dominate the study and discussion of literature, in the English-speaking world. Both schools emphasized the close reading of texts, elevating it far above generalizing discussion and speculation about either authorial intention (to say nothing of the author's psychology or biography, which became almost taboo subjects) or reader response. This emphasis on form and precise attention to "the words themselves" has persisted, after the decline of these critical doctrines themselves.

Theory
In 1957 Northrop Frye published the influential Anatomy of Criticism. In his works Frye noted that some critics tend to embrace an ideology, and to judge literary pieces on the basis of their adherence to such ideology. This has been a highly influential viewpoint among modern conservative thinkers. E. Michael Jones, for example, argues in his Degenerate Moderns that Stanley Fish was influenced by his adulterous affairs to reject classic literature that condemned adultery.[5] Jürgen Habermas in Erkenntnis und Interesse [1968] (Knowledge and Human Interests), described literary critical theory in literary studies as a form of hermeneutics: knowledge via interpretation to understand the meaning of human texts and symbolic expressions—including the interpretation of texts which themselves interpret other texts.

In the British and American literary establishment, the New Criticism was more or less dominant until the late 1960s. Around that time Anglo-American university literature departments began to witness a rise of a more explicitly philosophical literary theory, influenced by structuralism, then post-structuralism, and other kinds of Continental philosophy. It continued until the mid-1980s, when interest in "theory" peaked. Many later critics, though undoubtedly still influenced by theoretical work, have been comfortable simply interpreting literature rather than writing explicitly about methodology and philosophical presumptions.

History of the book
Related to other forms of literary criticism, the history of the book is a field of interdisciplinary inquiry drawing on the methods of bibliography, cultural history, history of literature, and media theory. Principally concerned with the production, circulation, and reception of texts and their material forms, book history seeks to connect forms of textuality with their material aspects.

Among the issues within the history of literature with which book history can be seen to intersect are: the development of authorship as a profession, the formation of reading audiences, the constraints of censorship and copyright, and the economics of literary form.

Current state
Today, interest in literary theory and continental philosophy coexists in university literature departments with a more conservative literary criticism of which the New Critics would probably have approved. Disagreements over the goals and methods of literary criticism, which characterized both sides taken by critics during the "rise" of theory, have declined. Many critics feel that they now have a great plurality of methods and approaches from which to choose.[citation needed]

Some critics work largely with theoretical texts, while others read traditional literature; interest in the literary canon is still great, but many critics are also interested in minority and women's literature, as elaborated on by certain academic journals such as Contemporary Women's Writing,[6] while some critics influenced by cultural studies read popular texts like comic books or pulp/genre fiction. Ecocritics have drawn connections between literature and the natural sciences. Darwinian literary studies studies literature in the context of evolutionary influences on human nature. And postcritique has sought to develop new ways of reading and responding to literary texts that go beyond the interpretive methods of critique. Many literary critics also work in film criticism or media studies. Some write intellectual history; others bring the results and methods of social history to bear on reading literature.[citation needed]

Value of academic criticism
The value of extensive literary analysis has been questioned by several prominent artists. Vladimir Nabokov once wrote that good readers do not read books, and particularly those which are considered to be literary masterpieces, "for the academic purpose of indulging in generalizations". Terry Eagleton attributes an unsung stature to literary critics and to criticism in academia. He believes that critics are not so well-known and praised, to his disappointment, and that literary criticism is declining in its value because of the manner the general audience is directing it towards that underappreciated state. At a 1986 Copenhagen conference of James Joyce scholars, Stephen J. Joyce (the modernist writer's grandson) said, "If my grandfather was here, he would have died laughing ... Dubliners and A Portrait of the Artist as a Young Man can be picked up, read, and enjoyed by virtually anybody without scholarly guides, theories, and intricate explanations, as can Ulysses, if you forget about all the hue and cry." He later questioned whether anything has been added to the legacy of Joyce's art by the 261 books of literary criticism stored in the Library of Congress